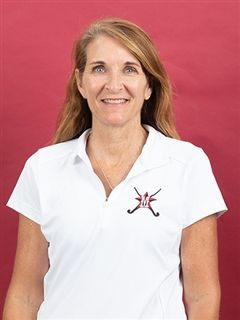 4/3/2020
St. John’s Athletic Department is pleased to announce that Brenda Mercado will take on the role of Interim Head Coach of the Maverick Field Hockey program effective immediately.  Brenda is no stranger to the program, having coached field hockey at St. John’s for the past 31 years. She has served as the Varsity assistant for 26 seasons, while also doubling up as the head coach for JV1 and middle school field hockey.  Brenda started her field hockey coaching career as a physical education major at the University of Central Oklahoma. Prior to coaching at St. John’s, she spent five seasons coaching field hockey at Casady School in Oklahoma City.

Brenda arrived at St. John’s in 1989 and served as the head coach for Girls’ Track & Field until 1995.  In 1996 she became the head coach of Middle School Track & Field, a position she still holds today along with her roles as Lower School PE teacher and Girls’ 7th-grade head basketball coach.


Coach Mercado has been a constant presence to the St. John’s athletic department in the last three decades.  Her loyalty to St. John’s, and depth of coaching in all three divisions gives the Maverick Field Hockey program a solid foundation to build upon.
Back