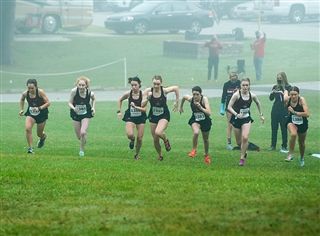 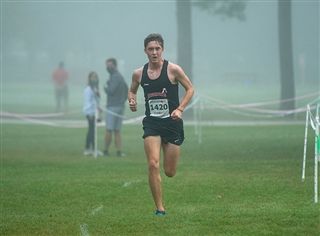 10/16/2020
Maverick Cross Country is back on course. The pandemic may have scratched some of the schedule, but it couldn’t stop the 40th running of the Ramble. While there there will always be a gap in the win/loss record from March to October, the competitive drive of the Maverick runners never went missing. St. John’s won the boys varsity, girls varsity, girls jv, and took a close second in the boys jv division.  The Boys also won the jv and varsity races at the Woodlands Christian meet the following week.
Emmanuel Sgouros '22 crossed the finish line for the top time of the day (16:20.2) in the boys varsity race. He was 30 seconds ahead of the second place runner, all alone in a fog that covered the Spring Creek Park Tomball course for most of the morning.  Sgouros has been a leading runner for the Mavericks for the past two seasons and has won all three races for St. John’s this month.


“It was a good race and tough from the beginning,” said Sgouros. “I’m looking forward to getting in some races with good competition. I feel fit.”


"The boys have been training very hard this fall, and we weren't really rested for their first 5K at the Ramble, on a deceptively challenging 5K course,” said Head Coach Richie Mercado ’79. “Emmanuel looked great for his first 5K and some of the other guys ran very well considering the circumstances.”


The Girls' Varsity was paced by Sarah Clark '22, who finished second overall in a time of 20:43.4.  This was her first Ramble and first 5K ever.  The previous Saturday she ran in her first cross country race.


“It was really fun and I like the course and everyone ran well,” said Clark, who just joined the team as a junior.


Clark excelled in track last spring and really enjoyed running. Her friends noticed it too and coaxed her into training during the pandemic and finally running cross country this fall.


“We didn’t know if we were going to have a real season, but actually being able to compete in person made all the work pay off,” said captain Caroline Thames ’22.  “There are a lot of things that have changed that we cannot do, but being able to compete is one thing we can do. It’s exciting to have a new person on the team and know that there are more people out there that haven't had the opportunity to compete but can be really good.”
“Her race mirrors everything she exhibits in practice,” said Head Coach Rachel Fabre. “She is a wonderful teammate, works diligently, likes to run, and wants to win.”


“I’m thankful Sarah has so much talent,” said captain Cici Calhoun ’22. “It’s impressive that she shows up being so competitive. We worked hard over the summer and put in more mileage than we were used to. When this 5K actually happened everyone was very excited and we won the race.”


“It seemed like a really fun team, and I liked to run,” said Sarah. “I like how you can push yourself and get better.  It is pretty hard mentally, and you have to remember your training to push through it. About halfway into the race it gets more difficult, and I try to find people in front of me to catch.”


The way things are trending, Sarah will have to search hard to find the next person to pass.  She has gone from eleventh to second in the two races of her short cross country career.


Sgouros has had no one in front of him in the last two races, due in part to his preparation in the pandemic. While Clark and her teammates were running on their own in Houston, Sgouros trained in Greece.


“My father is from a village in Greece, and I was able to get in some great runs there during the pandemic,” said Emmanuel, who ran every day averaging 65-70 miles per week. “When the pandemic hit I had a lot of time to focus on my training, and I made the decision about what I am going to dedicate myself to.”


“I have a lot of opportunities here and in Greece to compete in,” said Sgouros who also has big expectations for the Maverick 2021 Track & Field season in the 3200 and 1600 meter events.


Here in Houston, Sgouros and the boys' teams recently won the Woodlands Christian meet and the girls will join them at the Houston Area Prep Championships on November 7 back at Spring Creek Park.


“It’s been a good season so far, and hopefully we can keep it going,” said Sgouros.


Rested, ready, and real: catch ’em if you can!