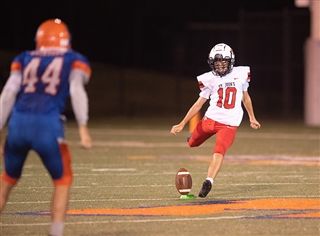 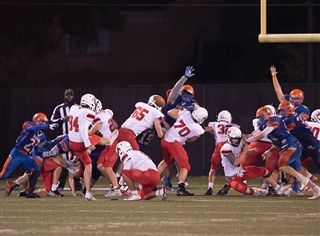 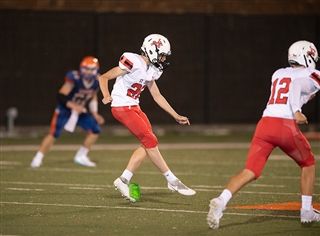 10/29/2020
St. John’s Junior Varsity Football had several games canceled due to the pandemic, but that didn’t stop the team from competing in drills.  Practice counts more than ever, and a foursome of kickers have created a friendly rivalry between the uprights. Caden Perry ’23, Logan Donley ’24,  Mati´as Adrogue´ ’24, and Adam Tibary ’24 all have something to prove when they strike the ball, and it’s not about showing up the other guys. They compete to complete each other. Pooch kicks, chip shots, angle kicks, onside kicks, deep kicks, squib kicks, and pre-shot routines: it’s all about targets and teammates.
When their number is called on game day, one of the four underclassmen will be lined up to kick a field goal, extra point, or kickoff for the Mavericks. The other three are focused from the sideline, cheering on their teammate.


“It’s exciting that they truly root for each other and want each other to get better everyday,” said Head Varsity Football Coach Kevin Veltri.


At this point in the shortened season, all of the kickers are getting a look in JV games.  Perry is also the starting kicker for the Varsity.  Donley has also been brought up for kickoffs. The majority of the competition however is during practice, as the four kickers spend about an hour working on their craft with Coach Jeb Ligums.


“All of these guys are really talented,” said Ligums. “To be as supportive of each other while competing for reps is very exciting to see.”


“Since there are other kickers, I have to put 110% on the field,” said Adrogue´. “Having other kickers on the team pushes me to try harder and challenge myself even more.”


“We’re lucky to have such a young group of good kickers,” said Veltri, who, along with Coach Jeff Malone, platoons the kickers in a rotation during practice and in games. “They make each other better. It’s a great thing to see. We create timed pressure situations in our drills, and these guys respond.”


All four kickers have made extra point attempts in JV games. Perry has also made a 41-yard field goal in the St. Thomas JV game, in addition to making all of his extra points in the Varsity games alongside senior kicker Pierce Glanville ’21.


“In practice with the other kickers, I mainly focus on improving and helping the other kickers with advice, as they do the same for me,” said Tibary. “Kicking in a game feels similar to kicking in practice, because practicing helps me compose myself so that I'm confident in games.”


“I like kicking because it’s fun and I can contribute to the team,” said Donley, who along with the other three, plays multiple positions on the field.


All of the kickers are also defensive backs: Donley is a running back, and Perry is a receiver. Outside of football season, they each play other sports, which helps them develop as kickers.  Donley plays basketball.  Tibary, who is in his first season of football, has 11 years of soccer experience to lean on, as does Adrogue´ and Perry.


“Just like following through with a shot in basketball, you have to follow through with your kicking motion,” said Donley.  “If you stop midway, you increase your chances of errors. Consistency is key.”


Donley has a set sequence of steps as his pre-kick routine. If he is off on the approach, the kick is not on target. Perry's routine includes taking a few practice kicks and visualizing the color of the grass, the goal posts, and the ball sailing through the uprights.


“Staying focused and relaxed is the most difficult part of the job,” said Perry.  “There’s lots of time between kicks. I just focus on what I have to do. I know that I will make it, because I practice it.”


While this young kicking corps will most likely remember the handful of games of 2020, it’s the moments on the practice field that have defined their season and set a new standard for the Maverick kicking game in years to come.