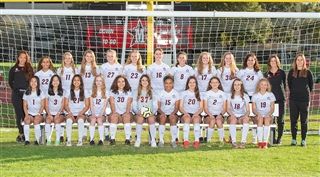 1/15/2021
St. John's Girls Varsity Soccer team has achieved a top 25 ranking from Top Drawer Soccer.  The Mavericks are ranked 22nd and are 3-1 so far this season. Their lone loss to 16th ranked EHS, was followed up with an upset win over 21st ranked St. Agnes.  St. John's also has wins over Concordia Lutheran and Houston Christian, their next scheduled opponent.
"The St. Agnes win is probably why we are ranked," said Head Girls Soccer Coach Erin Wierzba."

The Mavericks came back from a 1-0 deficit to win it with a field player subbing in as goalie.  St. Agnes won the 2020 TAPPS Division 1 State championship with a 6-0 win over Fort Worth Nolan, who had defeated 26-time state champion Ursuline in the TAPPS semi-finals last year.

"We lost 1-0 to Episcopal in a game in which I felt we should have won," said Wierzba.  "We did not capitalize on our opportunities, and they did. Very close and very good game. They are a very good team. I think the ranking is fantastic for the program and the girls as they have worked hard under challenging circumstances this season."