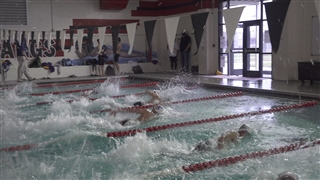 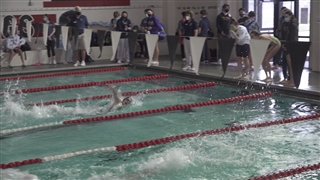 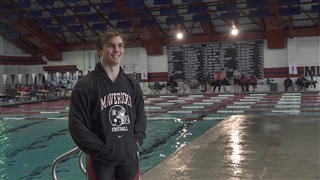 2/2/2021
St. John’s Swimming and Diving made a big splash this past weekend at the 2021 Houston Invitational Championship held at Westfield High School Natatorium.  The Girls won two relays and one individual event to finish first with 105.5 points.  Kinkaid was second with 85.5.  The Boys won six events including a school-record performance in the 50 freestyle by John Perdue ’22, to capture the Boys title with 132 points. John Cooper and Awty tied for second with 48 points apiece.
The Girls team won the opening event 200-yard medley relay with a time of 1:52.47 (Lexi Lukens ’23, Ainsley Dodson ’21, Ella Flowers ’22, Lillian Poag ’24), one second faster than their seed time and also a pool record. Flowers also won the 200 yard IM with a time of 2:04.86, smashing the pool record by 9 seconds. The Girls finished with a win in the 400 freestyle relay with Georgianna Mathews ’21, Dodson, Lukens, and Flowers (3:40.29).
“Having everyone here and getting this opportunity, we’re super excited,” said Dodson. “Next week (South Zone meet) we are going to just go all out.”
“Everyone showed up today,” said Mathews.  It’s very much like it normally is and we’re looking forward to next weekend.”
St. John’s Boys started off in the first event with a win just like the girls did.  Rhys Beauchamp ’21, Michael Skaribas ’22, Todd Achuff ’22, and Perdue won the 200-yard medley relay (1:41.10), more than three seconds faster than their seed time. Matthew Hensel ’21 won the 100-yard breaststroke (1:03.49) and also was part of the 200 freestyle relay winning team with Perdue, Skaribas, and Alex Miao ’24 (1:31.98).
“The fact that we are able to have a meet like this and a chance to compete is very exciting,” said Hensel.
“Divers and swimmers did well today,” said Head Coach Ron Raper.  “Fortunately, just as planned.”
In addition to breaking the 50-yard freestyle school-record in 22.04 seconds, Perdue scored a team-high 14 points with four first-place finishes including the 100-yard freestyle and the two relays. Jordan Fullen ’20 held the previous 50 freestyle record with a time of 22.05 seconds.
“Getting to be a part of two teams (in one season) and building those relationships and being able to compete for the school in as many places as I can is a lot of fun,” said Perdue, who also wrestles in the current season.
“Luckily, I can head straight over to swim then come back for wrestling practice,” said Perdue. “I just need to make sure I get a lot of sleep and keep myself in good shape to train as much as I need to and eventually compete at a high level. It’s kept me very busy but it’s easy to stay motivated when I love what I’m doing.”
Perdue’s feats in the winter season do not end in February.  He also plays quarterback and safety in football in the fall and runs the 400 meters in track in the spring.  He is immersed in the athletic arena and knows how to manage his time by working with all of his coaches.
“Coach Cambell (Head Strength & Conditioning Coach)  has been instrumental in helping me stay healthy but also in shape through all of this,” said Perdue. “His help, alongside Coach Paul (Head Wrestling Coach) and Coach Raper’s flexibility, is what made all this possible.”
“John is an All-State, All-SPC, and a National Qualifier in wrestling (182 lb.),” said Coach Paul. “The key is to let him compete."


Prior to the 50-freestyle record swim, Perdue said “it’s going to be a great day,” and one can’t argue that it was well planned for Perdue and all of the Mavericks.


Next up is the South Zone meet on Saturday, February 6 at the University of Houston.  No spectators are allowed; however, the event can be viewed live on Vype.