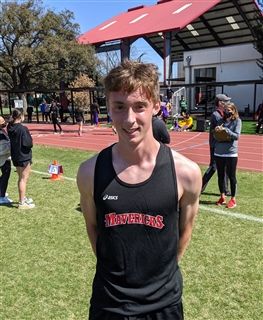 Records for Sgouros are Becoming Routine

4/15/2021
Emmanuel Sgouros '21 is breaking school records, setting new PR's, and is hard to catch in Texas, Alabama, and North Carolina so far.  Sgouros ranks 4th in the state and 20th in the nation in the 1600 meters with his latest time of  4:12.28 (school record).  Emmanuel also broke the school record in the 3200 meters winning the New Balance Dash for Doobie 3200 meter race in Winston Salem, NC with a time of 9:05.92.  Drew Woodfolk '18 previously held the record with a time of 9:45.35. Sgouros, Pierce Ederle '21, Josh Schwartz '21, and William Thames '23 also broke the Nick Finnegan Spring Invitational meet record (8:03.95) and school record (8:00.86) previously held by Sam Faraguna '19, Sam Ho '18, Douglas Parsley '20, and Woodfolk.
Sgouros’ quest to make running a priority started last summer in Greece.  He has been on a record-breaking trajectory ever since.


“My father is from a village in Greece, and I was able to get in some great runs there during the pandemic,” said Emmanuel, who ran every day averaging 65-70 miles per week. “When the pandemic hit I had a lot of time to focus on my training, and I made the decision about what I am going to dedicate myself to.”


Upon his return to school this past fall, Emmanuel won all five cross country races he entered, set a PR of 15:44 at the Houston Area Prep Championships, which was won by St. John’s, and was selected as Chronicle Boys Athlete of the Week. He then segued into his starting role with the undefeated Varsity Boys’ Soccer team in the winter season while also expanding his circle of competition in races outside of Texas.
“Over the winter I had great training sessions and stepped up the mileage,” said Emmanuel.


In late November Emmanuel ran 15:21.69 to finish 76th out of 288 runners in the Boys Championship race at the RunningLane Cross Country Championships in Huntsville, Alabama. He became the SPC #4 All-Time runner for 5000 meters, broke the school record and achieved a ranking of  #31 in Texas for 2020 and #170 nationally.  Complete RunningLane results are HERE. TxMilesplit article on Emmanuel and the St. Mark's runner is HERE.
In track & field this spring he shattered the school record in the 3200 (2nd in Texas, 22nd in the nation), and broke his own record in the 1600.  Wherever he runs, Sgouros is continually changing the level of competition, but some things stay the same.
“I’m trying to do the same things for each race and limit what can change,” said Sgouros. “Twenty four hours out I get eight to nine hours sleep.  I eat the same meal (spaghetti) the night before and the same breakfast (oatmeal) the day of the race. I stretch and stay calm and do the same things over and over.”


His routines are working and he knows when he is going to have a good race before it ends.


“You can tell by the way you feel in the first half mile by seeing the time and feeling effortless,” said Emmanuel.  “You let the adrenaline carry you through and that’s how you know you have a good race.”


What’s Sgouros’ next move? Emmanuel looks to expand his circle of competition across the Atlantic. His big goal is to compete in the U18 Pan Hellenic Track & Field Championships in July and the European Championships in August, 2021.