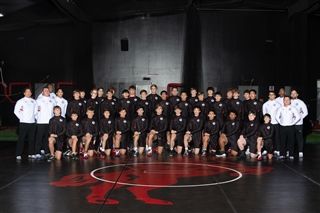 5/3/2021
Maverick Wrestling recently won a third consecutive Texas Prep State title to go along with seven SPC championships, and two Texas State Dual crowns.  The team also sent 14 mat men to the Prep Nationals held at the Mohegan Sun Arena in Wilkes-Barre, PA this past weekend.  Four Mavericks finished in the top 12 with John Perdue ’22 landing in sixth place and taking All-American honors.  See the latest coverage on the Mavericks from KPRC Click2 Houston and the Houston Chronicle.

Maverick Wrestling won their third consecutive Texas Prep State Championship back in April.  The SPC tournament was canceled denying the Mavericks a chance for a sixth consecutive SPC title.  St. John’s still had the opportunity to test against the best at the Prep National Open. The team sent 14 mat men to the Prep Nationals held at the Mohegan Sun Arena in Wilkes-Barre, PA this past weekend.  Duncan McLaren ’22, Tyler Langin ’23, and Sebastian Jimenez ’21 finished in the top 12.  John Perdue ’22 landed in sixth place and brought home All-American honors.


“All of our wrestlers competed at a high level,” said Head Coach Alan Paul.  “While many guys did not win a match, what they gained from the experience is invaluable.  The younger guys were able to see that the success of our veterans is directly proportional to the work they put into practice.”


“They are exposed to the top competition in the nation,” said Coach Paul. “This is something that cannot be duplicated at home.  The experience sinks in and they have that to motivate them for next season and beyond.”


St. John’s rolls up the mats for another stellar season.  They reached top of the podium at the Prep State tournament.  They battled delays and setbacks during the pandemic to finally compete in local, state and national events.  While they graduate five seniors (Tommy Chang ’21, Michael Daichman ’21, Sebastian Jimenez ’21, Eric Johnson ’21, and Ken Matsunaga ’21), the Mavericks are primed for next season, having learned their lessons from their peers.