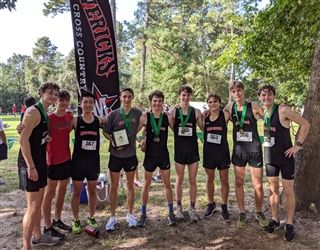 Sgouros Paces Boys' Cross Country On and Off the Course

9/5/2021
If you're a St. John’s Cross Country fan, you know that Emmanuel Sgouros ’22, nationally-ranked runner and European champion, is fast, very fast. But what you may not be aware of is his impact on his teammates. This August, the 34th annual Greenhill 6-Mile relay race was won by St. John’s for the first time ever. The field was composed of 6A schools and a handful of SPC teams. Each school separated its runners into teams of four to cover the total distance in 1.5-mile legs. Danny Wasserman '24, William Thames '23, Wilson Bailey '23, and Sgouros represented St. John’s top foursome. When Sgouros was tagged by Bailey for the anchor leg, the Mavericks were about eight places out of the lead. Sgouros went to work and caught St. Mark’s top runner on the last turn for the victory and some new hardware for the Maverick program. Sgouros’ three teammates can also say they finally won a race with him in it.
“It was a big gap, but I thought I had a chance to do it,” said Emmanuel on the Greenhill win. “I enjoyed it, and am looking forward to the season. It should be fun. We hope to win SPC (there).”


Last cross country season Emmanuel missed one of the meets, but he won the other four that were on the Mavericks’ schedule. In the spring of 2021, he did not lose a single race in the 1600 or 3200 for St John's in track & field and also ran the 4x8 when they broke the school record. During his sophomore season, he was the number one runner just ahead of Davis Thames ’20. No one on the current team has finished ahead of him in any high school race. Bailey was also chasing Sgouros starting in middle school as his teammate at AOS when Sgouros won the HJPC title.


While Sgouros is the clear favorite to pace the Mavericks and the SPC this fall, he can’t do it alone. His teammates understand that winning SPC will take at least four more runners. Each team’s top five runners factor into the final score with the sixth place runner breaking a tie.

"Cross country might very well be the perfect high-school sport: it balances individual performance and team performance, it's wonderfully efficient, it rewards hard work, and it shows student-athletes how to take care of themselves for a lifetime," said Headmaster Dan Alig, who coached cross country in his previous time at St. John's.


Sgouros and his teammates are proving the truth of Alig’s remarks. Fellow captain Bo Farnell ’22 realized early on as a freshman that with a teammate like Emmanuel, being the best on the team was not a realistic goal, but being his own best was important to the team.


“It got me to prioritize my role on the team and help my teammates to the best of my ability,” said Farnell.


According to Head Coach Richie Mercado ’79, there is a big group of runners on the team that is pushing each other to get in the top five.


“He is the benchmark,” said Bailey.  “We get to run with a top runner in the country.”


“We see first hand what is possible,” said William Thames.


Running is only part of Sgouros' effect on the team.  His discipline and focus on detail set the tone for the team both on and off the course.


“Day in and day out his commitment is really a testament to what we want the program to look like,” said captain Russell Li ’22.”  “He is inspiring us all of the time.”


“He pushes us all,” said captain Brady Puckett ’22. “We see what one is capable of doing in high school in races and in recovery runs. He is very consistent with his training, eating, and sleeping habits.  It’s amazing what the outcomes are throughout the season. He inspires us all to do the same. He also eats a lot of peanut butter.”


“He told us we need to run faster if we want to win a championship,” said Bailey.


“We love having Emmanuel so strong in front, but everyone understands that he cannot run SPC by himself - it takes five solid runners,” said Mercado.


The 2021 Fall SPC championships will take place in early November back at Norbuck Park where the Mavericks won their first race of the season. To win this last one, they will need to keep following their leader as closely as possible, pushing themselves to achieve their own best times. And make sure to bring the peanut butter.