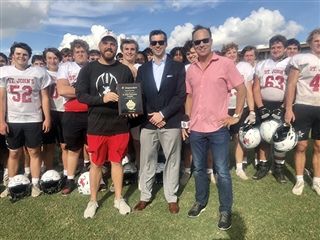 10/14/2021
St. John's Mavericks Varsity Football defeated EHS 24-20 on October 8th and moved up to third in the Chronicle Houston Area Private School rankings in addition to receiving Team of the Week honors from H Town High School Sports. Check out the highlights of the game here. The full show from @HTownHSS airs on @ATTSportsNetSW.  The following week, St. John's won the final home game of the season 49-13 over St. Mark's.

The Mavericks (7-1) lost their first game of the season against Episcopal School of Dallas (9-0) on October 22 at ESD in a battle of once undefeated SPC 4A teams. St. John's plays Kinkaid in the last game of the regular season on Friday, October 29 at Rice University Stadium. The kickoff is 7:00 p.m.
Back