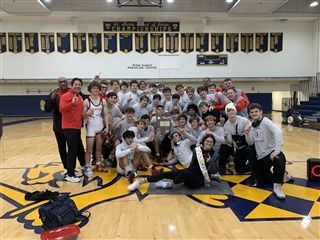 1/22/2022
Congratulations to St. John’s Wrestling for winning the 2022 Texas State Duals Wrestling title. The Mavericks marched through their pool with wins over First Baptist, ESD, and Trinity Christian.  In the semi-finals, St. John’s defeated EHS 48-34 and followed up with a 54-23 win over Bishop Lynch in the finals. The Maverick mat men have won seven SPC titles and four Texas Prep State championships to go along with three State Duals championships for 14 total titles.
The Maverick breezed through their pool play winning 72-10, 84-0, and 72-6 over First Baptist, ESD, and TCA respectively. To capture their third state duals title, they would need a lift from their lineup to push past EHS in the semi-finals and eventually Bishop Lynch in the championship. Where they got it was not from their usual stalwarts.


“There is a point in the dual when you know it’s over,” said Head Coach Alan Paul, who recorded his 250th duals win against Bishop Lynch.


Duals start with a randomly assigned weight class at the beginning of the tournament and move to the next weight in successive duals. Teams are assigned to a pool for a round-robin format. The winner of each pool advances to the semifinals. 14 total matches make up each dual.


Before each dual, captains are sent out to the mat for a coin toss to determine which team sends out their wrestler first on odd or even-numbered matches numbered 1-14.


“It’s a chess match, and we have a game plan for each dual,” said Coach Paul. “It’s about the order of the matches for both teams.”


After 10 matches in the semifinals against EHS, the Mavericks held a 30-28 lead over the Knights. In the next match freshman Mason Lum (106 lbs), in his first state duals tournament, pinned his opponent for six points for an eight-point lead and a big shift in momentum.


“Once he did that, he sealed the deal,” said Coach Paul.


“When you are on the mat every decision you make affects you,” said Lum.


Individual performances can be contagious to the team and could not have been more poignant than in the finals against Bishop Lynch. Senior William Suttle (170 lbs) and junior Cinco Grobmeyer (182 lbs), in their first state duals finals matches, put up back-to-back pins that ignited the team for five more pins.


“That made me extremely happy and the team was fired up after that,” said Grobmeyer.”


“Once Cinco did that you could feel the team’s energy,” said Coach Paul.


“It’s special to be a part of a team that wins state and special to be in the lineup up and progressing through the years in the program,” said Suttle.


According to All-American/All-State/All-SPC senior John Perdue, who has not lost a match in Texas since 2019, the team had a great week of training before state. They are now back at practice getting ready for another chess match on the mats- the 2022 Prep State tournament hosted by St. Thomas High School on February 5.