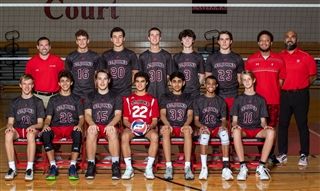 10/7/2022
Ryan Wood ’23 is a senior starter on the Boys’ Varsity Volleyball team. He joins a team of seven lettermen and experienced JV players, but Wood has yet to letter in volleyball, and he never played JV.  In fact, he has only dabbled with the sport, beginning this past summer. How can a senior “walk-on” play like a seasoned veteran?

“I played a lot of volleyball this summer with teammate Jack Aitken ’23, and I fell in love with the sport,” said Wood. “There was no risk in trying out for the team. I could have dropped it, but the rewards are worth the chance. I encourage others to try something new."


Wood may be a rookie in volleyball, but he brings skills and moxie from both soccer and tennis, teams in which he has played in all four years and now captains.


“He’s a great communicator who shows leadership, understands what to do, and picks up concepts quickly,” said Head Volleyball Coach Chaz Hulet. “I first saw this when we had our preseason practices with our high school players mentoring middle school players.  Ryan just jumped in and started coaching them up!”

“Communication is always extremely important,” said Wood. “In tennis doubles, you call out ‘mine” just like in volleyball, which is even more collaborative.  In soccer, you have to know who is defending whom. You are always talking.”

Wood has great hands in tennis, having gone undefeated in conference doubles for the past two seasons. His footwork in soccer is just as crafty, and he is putting it all to good use as he learns the finer points of playing volleyball.

“At the very beginning a ball came fast to my feet and I kicked it up and it was a good ball, but that is frowned upon,” said Wood.  “It is more consistent (in volleyball) to hit the ball with your hands.”
Wood does his job and more. He puts in extra time in practice and is not afraid to ask for help. He may hit a few balls out or in the net, but his teammates and coaches back him up.


“My teammates understand that I am new and that I’m working on improving, and the coaching staff is supportive and decided to spend a lot of time on me,” said Wood. “I’m also supported by a fantastic setter in Jackson Byers ’24: all you have to do is jump and the ball is there.”


“Ryan brings a new energy to the team and has picked the game up well,” said Byers.  “He’s a good hitter and I like setting him.”


“He pushes his teammates to be better.” said assistant coach Phil Guerrero.


The Mavericks are 3-2 in the SPC South Zone, having lost a close match to rival Kinkaid last week. Moving forward, they play each team in the zone one more time before SPC. With Wood playing like he still has nothing to lose with a team who has his back, the Mavericks’ chances are starting to add up.