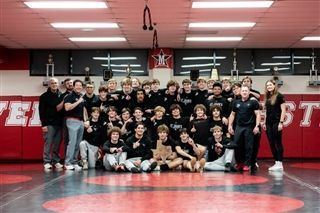 1/22/2023
Sam Chambers
Congratulations to St. John's Wrestling for capturing the 2023 Prep State Duals Championship held at St. John's.  St. John's won the previous three state duals championships going back to 2019. Next up are the Prep State Championships on February 4th at McKinney Christian Academy where the Mavericks are seeking their fifth consecutive Prep State title.
2023 Prep State Duals results:
The Mavs defeated ESD 66-15 and Cornerstone 78-3 in the initial pool round.  In the championship round between the four pool winners, St. John's defeated Bishop Lynch 51-30 and St. Thomas 60-14. The Mavericks lost to Liberty Christian 36-45, but led in overall match wins in the championship round to take the title.
Back